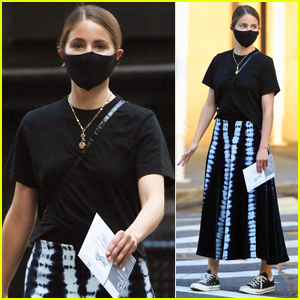 Dianna Agron is sending in her ballot!

The 34-year-old actress was joined by a friend to stop by the Post Office to cast her vote on Tuesday afternoon (October 20) in New York City.

PHOTOS: Check out the latest pics of Dianna Agron

Dianna kept things casual in a black T-shirt paired with a long, black and white skirt and a black face mask for her outing.

Noticeably missing was Dianna‘s wedding ring. It was reported back in August that Dianna and husband Winston Marshall had split up after three years of marriage.

“A great day to VOTE 🗳” Dianna wrote with the video.

Last year, Dianna reunited with tons of her former Glee co-stars for a fun night out!