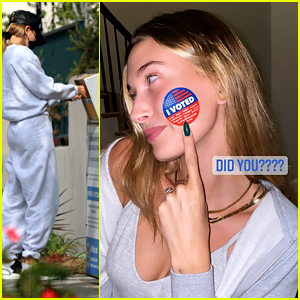 Hailey Bieber slips an envelope in a box as she takes part in early mail-in voting in Los Angeles on Tuesday afternoon (October 20).

The 23-year-old model remembered to cast her vote and make it count just after taking a fitness class with a friend earlier in the day.

Hailey was spotted leaving a local convenience store with a juice and some snacks to go before dropping off her ballot.

PHOTOS: Check out the latest pics of Hailey Bieber

Hailey‘s spotting follows actor Chace Crawford, who was seen dropping off his own ballot the day before.

Hailey made headlines just a few weeks ago when it was revealed she and her famous dad, Stephen Baldwin, are voting for two different people.

Over the weekend, Hailey debuted a new tattoo. See what it says here!