Katherine Schwarzenegger is speaking out in response to the internet deciding that her husband Chris Pratt is the “worst Chris” in Hollywood.

The four Chris actors who were part of the debate included Pratt, Chris Hemsworth, Chris Evans, and Chris Pine. A lot of people just assume that Pratt is a Republican and he’s constantly slammed because of that, but there’s evidence that proves it’s not true.

Katherine commented on that E! News post and wrote, “Is this really what we need? There’s so much going on in the world and people struggling in so many ways. Being mean is so yesterday. There’s enough room to love all these guys. Love is what we all need not meanness and bullying. Let’s try that.”

Robert Downey Jr. has a message for anyone who has a negative opinion of Chris.

See the screencap below! 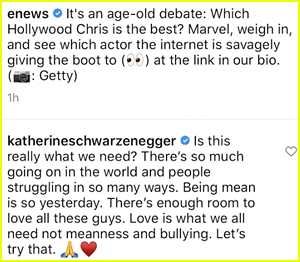 As always, I’m proud of this young woman. Proud of what she says and does. We all need more love and kindness in the world. https://t.co/MqmHPm9HIj