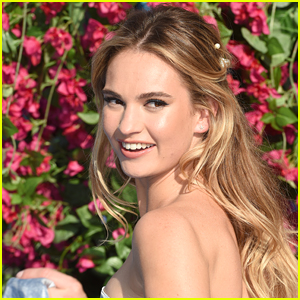 Lily James is back in the spotlight for the first time since she was photographed engaging in some PDA with her married co-star Dominic West.

The 31-year-old actress made an appearance on The Tonight Show Starring Jimmy Fallon on Wednesday (October 21) to promote her new Netflix movie Rebecca.

Last week, Lily and her Pursuit of Love co-star Dominic were seen cuddling in Rome at the airport and he was seen kissing her neck while taking in the sights of the city.

Lily actually cancelled a few other TV show appearances this week, but went through with this one. She was not asked about the scandalous photos.

Meanwhile, days before those photos of Lily and Dominic were released, there was another big story about Lily’s personal life.