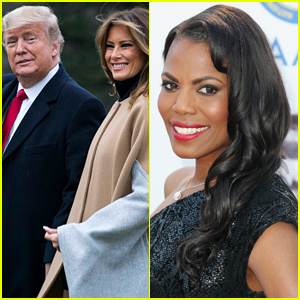 “It’s a very strange marriage, and I’m very cautious to comment on the dynamics of people’ marriage — you never know the inner-workings — but I’ve known this couple since they were dating,” the 46-year-old said on the British morning talk show Lorraine. “And in fact, they got married a year after The Apprentice aired.”

“What I’ve observed over the last 17 years … Sometimes they like each other and other times she’s repulsed by him,” she continued. “As we saw just on the debate last Thursday, he went to go and touch her hand and she smacked it away.” If you don’t know, Omarosa worked for Trump‘s White House in 2017 but she left the position. Omarosa actually once revealed some secret audio between her and Trump.

She also spoke about what will happen if Trump loses the election.

“I think that he will fight leaving office,” she said. “But, thank God, there are safeguards in place for a peaceful transition of power and so, as much as he may pout like a baby and throw a tantrum, there are forces that will be able to move and usher him right out of the White House and bring in new leadership, and in this case, I hope that it in fact is Joe Biden and Sen. Kamala Harris.”

If you missed it, people think Melania has been replaced by a body double in these latest Trump appearance pics.