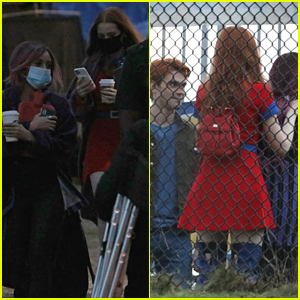 Vanessa Morgan is seen out in public for the first time on Thursday (October 8) in Vancouver, British Columbia.

The 28-year-old pregnant actress joined her co-star Madelaine Petsch to film scenes for their show Riverdale.

Vanessa announced her pregnancy back in July, and shared a sonogram photo of her baby boy in August.

There has been no word on if her pregnancy will be written into the show, which will have a seven year time jump in the upcoming fifth season.

The cast is back to work after being off for a week when production was shut down temporarily due to COVID testing delays. Many other productions in Vancouver were also shut down.

Riverdale is set to return on Wednesday nights in January 2021 on The CW.

In case you missed it, see which Riverdale actor was recently promoted to series regular!