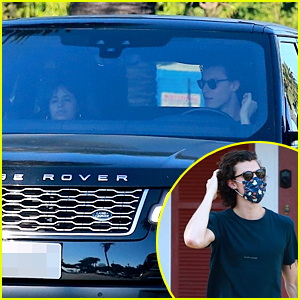 Shawn Mendes wears an adorable Halloween-themed mask while stopping by a house to pick up a new camera on Wednesday (October 14) in Santa Monica, Calif.

The 22-year-old singer quickly got out of the car to run the errand while his girlfriend Camila Cabello waited in the passenger seat of their Range Rover car.

We also have photos of Camila stepping out in Los Angeles on Tuesday while dropping off her ballot. She wore a “VOTE” face mask, which she accidentally wore upside down.

Shawn was spotted at a studio on Tuesday and he later arrived at Camila‘s home after wrapping up his work. He announced some big news that day and Netflix is involved in the upcoming project.

10+ pictures inside of Shawn Mendes and Camila Cabello running errands…