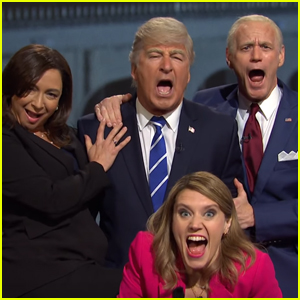 Saturday night’s episode (October 17) kicked off with a cold open playfully poking fun at the town halls, which made headlines for being scheduled at the exact same time amid protests from Hollywood to stagger the airings.

PHOTOS: Check out the latest pics of Maya Rudolph

The skit featured viewers flipping back and forth between the two.

“One town hall was a thoughtful, cogent discussion of the issues facing our country. The other featured President Trump,” the announcer said.

One former cast member recently explained why she doesn’t miss being on SNL.