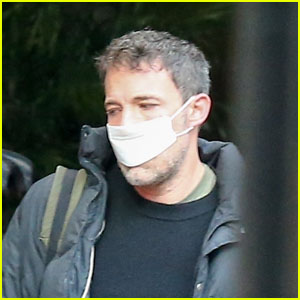 Ben Affleck and Ana de Armas are stepping out.

The 48-year-old actor was seen wearing what appears to be a kid’s size mask while leaving a hotel with his 32-year-old girlfriend on Sunday morning (November 22) in New Orleans, La.

PHOTOS: Check out the latest pics of Ben Affleck

Ben appeared to be holding onto a Diet Coke for breakfast as he headed to the waiting car early in the morning. The couple is currently in town filming scenes for their movie together, Deep Water.

Earlier in the week, the couple was spotted sharing a kiss in between scenes, while wore a fake engagement ring during their day of filming. You can see their PDA pics on People!

Ben and Ana started dating shortly after meeting on set of Deep Water earlier this year.

Deep Water is set to follows “a small-town couple (Affleck and de Armas) in a loveless marriage in which the wife is allowed to take lovers as long as she does not desert the family. However, complications arise when the husband takes credit for the unsolved murder of one of the former lovers.”