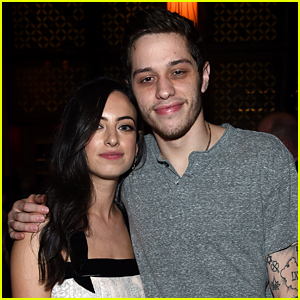 Cazzie David is the daughter of Larry David and she has a book of essays coming out next week titled “No One Asked for This.”

One of the essays in the book is about her two-a-half-year relationship with Pete Davidson, which ended just two days before he started dating Ariana Grande.

After being in a relationship for over two years, Cazzie apparently had trouble convincing Pete that she cared for him. Eventually, she wanted to end the relationship but paused because “previously, self-harm and suicide threats had come about from trivial circumstances.”

Eventually, Cazzie broke up with him but the next day, felt regret and called him to apologize. Pete responded by saying he was “the happiest he had ever been” and dumped her via text message just two days later.

The very next day, Pete was with Ariana Grande.

On a plane to her sister’s graduation, she “shook uncontrollably in [her dad’s] arms for the entire flight.” “CAZZIE, COME ON!” her dad screamed at her. “YOUR ANCESTORS SURVIVED THE HOLOCAUST!”

She received nasty comments on her Instagram saying Pete had upgraded from Walmart to Chanel.

“It was a really pivotal moment in my life,” Cazzie told the Los Angeles Times about the whole ordeal. “And writing about it has caused me a ton of anxiety, especially because I talk so much about hating the attention it brought me. Why would I bring more attention to myself by writing about it? But there’s nothing that’s gonna be worse than what I already experienced with that.”

Pete and Cazzie are now friends again and he read her essay.

Meanwhile, if you missed it, Pete once spilled every detail about all of his famous exes.