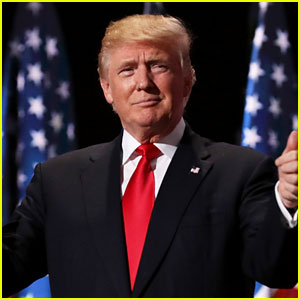 Donald Trump spoke out in the early morning hours of Wednesday (November 4) to attack the Democrats and claim that they are trying to steal the election.

The President of the United States, who is hoping to be re-elected, had a big typo in his tweet, which he deleted and reposted to fix the error.

“We are up BIG, but they are trying to STEAL the Election. We will never let them do it. Votes cannot be cast after the Poles are closed!” Trump tweeted. He later deleted the tweet and posted it again with “Polls” spelled correctly.

Twitter flagged the tweet as misleading and you can only read it by acknowledging this and clicking the “view” button.

Lots of celebs – including Jimmy Kimmel, Sophia Bush, Debra Messing, and Stephen Amell – have reacted to the tweet and the spelling mistake. You can read below.

Dear @realDonaldTrump – you accidentally deleted this tweet about Poles pic.twitter.com/D5rQd5KMXN

Counting ALL OF THE VOTES CAST IN THE ELECTION — for however many hours as it takes, even after the polls close, until they’re all counted — IS NOT the same as letting people cast their ballots AFTER the polls close, ya dingdong. You’re embarrassing. 🤦🏻‍♀️ https://t.co/xhbjRgKfgI

Click inside to read the rest of the tweets from celebs…

Um, no. You are losing in the electoral college count currently. And when ALL the mail-in ballots,from our troops overseas,are counted, you will lose.

For what it’s worth, I want this election to be won fair and square. Trump or Biden. Congratulations to the winner. But this tweet is so reckless and incendiary. It is the opposite of what a leader should do.

*Trump’s Tweet was deleted either by himself (because he realized the error in basic English grammar?) or because Twitter flagged it for dissimenating inaccurate information. Which means he’s either an idiot or a liar or both?

no one is CASTING VOTES YOU ASSHOLE, they are counting them. Counting votes isn’t theft, it’s democracy! https://t.co/I7oFQR7VeZ

My pole has been closed since mid March 😩

He’s a criminal and a moron.

Definitely trying to STEEL the elecktchen you piece of schit 🙃

this is illegal and untrue

I like presidential candidates that spell the word “POLLS” correctly!

You been going to too many strip clubs. They got poles! https://t.co/0XoYSVqZSI

Poles???!!! You are unbelievably stupid https://t.co/doQVHFOBxl