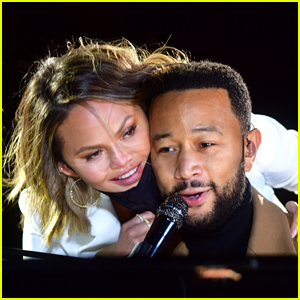 Chrissy Teigen gives her husband John Legend a hug from behind while on stage at a Biden-Harris rally on Monday (November 2) in Philadelphia, Penn.

The 41-year-old EGOT winner performed at a rally that was attended by Kamala Harris on the night before the presidential election.

During the event, John brought Chrissy and their kids on stage before he performed the song “Never Break,” a song that he dedicated to his wife a few weeks ago while performing at the Billboard Music Awards.

The couple recently suffered a pregnancy loss and they got matching tattoos to honor their late son, who they had named Jack.

At the rally, John spoke out against the famous rappers who have recently voiced support for President Trump and the “Platinum Plan” he created.