Isaiah Washington was fired from Grey’s Anatomy back in 2007 for using a homophobic slur, and now, 13 years later, he is calling out his former co-star, Katherine Heigl.

In the Golden Globes press room back in 2007, Washington famously addressed the rumor that he used a derogatory term and said, “No, I did not call T.R. [Knight] a f—-t. Never happened, never happened.”

Katherine slammed Washington at the time, saying, “I’m going to be really honest right now, he needs to just not speak in public. Period. I’m sorry, that did not need to be said, I’m not okay with it.”

Well, on Monday (November 16), Washington tweeted a photo of Katherine with the caption, “This woman once proclaimed that I should ‘never’ be allowed to speak publicly again. The world agreed with her proclamation back then and protested for my job and my head in 65 languages. I wish I was on Twitter in 2007, because I will NEVER stop exercising my free speech.”

He then continued to tweet out more and more about the incident. 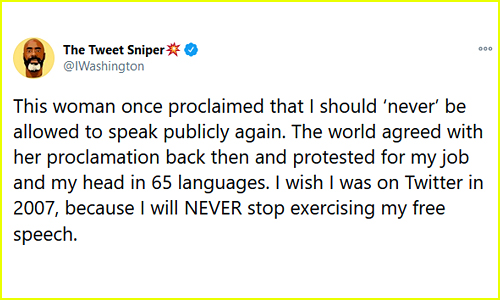 #MySleeptweet Your opinions are your own, but you are a fool, a liberal and and misguided feminist to even try and defend this woman. You weren’t there, so die on this hill, whoever you are. She could have cared less about her gay friend. Chandra Wilson knows all about that too. https://t.co/eCp5wUbWGa

If you care to know, Washington revealed who he supported in the 2020 election.