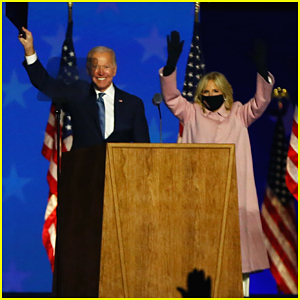 Joe Biden and his wife, Dr. Jill Biden, wave to supporters outside the Chase Center in Wilmington, Del., on Wednesday morning (November 4).

The 77-year-old Democratic nominee gave a speech during the event, urging everyone to have patience with the election results.

While most are eager to hear if Biden or his opponent and current President Donald Trump won, it will take longer as Michigan, Wisconsin and Pennsylvania are counting their mail in ballots last.

An winner might not be officially declared until Friday.

“Keep the faith guys, we’re gonna win this,” Joe shared with the crowd. “We believe we’re on track to win this election. It ain’t over until every ballot is counted…but we’re feeling good about where we are.”

He added, “It’s not my place or Donald Trump’s place to declare who won the election. That’s the decision of the American people.”

Joe Biden: "It’s not my place or Donald Trump’s place to declare who’s won this election—that’s the decision of the American people." https://t.co/GwwRl4EUb3 #ElectionNight pic.twitter.com/PeWCxEVdDS

Here’s what Joe did ahead of election night…

25+ pictures inside of Joe Biden and Dr. Jill Biden speaking in Wilmington…