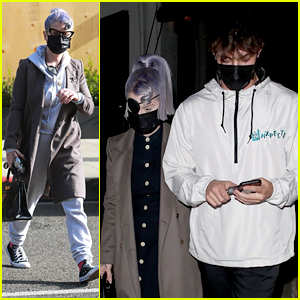 Kelly Osbourne keeps her head down while heading back to a car with Griffin Johnson in Los Angeles on Tuesday night (November 17).

The 36-year-old actress kept close to Griffin as they finished up a meal at Craig’s restaurant and headed home after the date night out.

Kelly and Griffin were first spotted out together in October.

Earlier in the day, Kelly was seen out with some of her friends, celebrating one of their birthdays at a local cafe.

PHOTOS: Check out the latest pics of Kelly Osbourne

Are you wondering about her eye patch that she’s wearing? Kelly revealed that same day that she had suffered a little injury to her right eye as her makeup artist was glamming her up.

“When your makeup artist says, ‘Don’t move,’ don’t move. Don’t move at all,” she advised her fans.

Don’t worry though, the next day (November 18), Kelly was all healed up as she seen without the patch on.