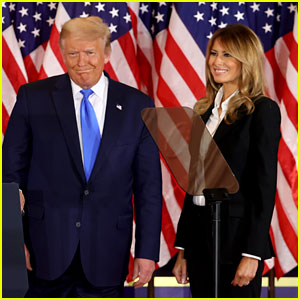 An entertaining conspiracy theory that has been spreading for the past couple weeks is that Melania Trump has a body double who has been attending events in her place, though it has been debunked.

The real Melania was by her husband President Trump‘s side while he gave a speech in the late hours of election night on Wednesday morning (November 4) in Washington, D.C.

Melania didn’t wear her signature sunglasses while appearing with the First Family inside the White House.

While the body double rumors have been going on for years now, Twitter blew up with more conspiracy theories after photos emerged of Melania boarding Marine One with Donald. In the pics, she didn’t look like her normal self, but people have attributed it to her smiling.

The “Fake Melania” rumors continued just a few days ago when she appeared at campaign rallies with her sunglasses on.

On Election Day, Melania was seen stepping out in Florida (wearing her sunglasses) to place her vote.