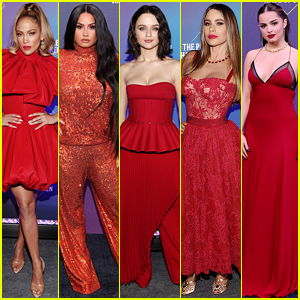 Red was clearly the most popular color of the night at the 2020 People’s Choice Awards!

Five celebs, including host Demi Lovato, wore the color while attending the annual event on Sunday night (November 15) at the Barker Hanger in Santa Monica, Calif.

Demi kicked off the night in a sparkly red Naeem Khan number on the carpet and then she changed into four more outfits while hosting the show.

Sofia Vergara wore a red dress from Dolce&Gabbana while accepting the Comedy TV Star award, which marked her final-ever award for Modern Family.

TikTok star Addison Rae wore a vintage red dress as one of the night’s many presenters.

WHAT DID YOU THINK of the red trend at the People’s Choice Awards?