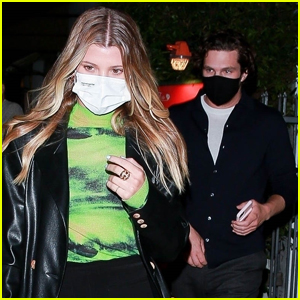 Sofia Richie is enjoying a night out with her new boyfriend Matthew Morton!

The 22-year-old model and the 27-year-old co-founder of Cha Cha Matcha were escorted by security out to their car after grabbing dinner at Giorgio Baldi on Friday night (November 7) in Santa Monica, Calif.

Sofia looked cool in a long, black leather coat over a green top while Matthew wore navy button-down shirt and dark jeans for their date night.

Sofia and Matthew first sparked dating rumors last month when they were spotted grabbing dinner together at Nobu.

Sofia and Scott Disick broke up “for good” back in August after dating on and off for a few years.