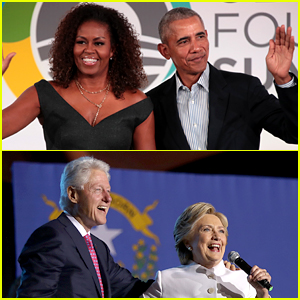 Barack and Michelle Obama, Hillary and Bill Clinton, and so many more political figures are speaking out to celebrate the news that Joe Biden is the projected winner of the presidential election.

After nearly four days of waiting, it was finally projected that the Biden-Harris ticket is heading to the White House in January, ousting the Trump administration.

We already posted about all of the celebs who have spoken out following the news and now it’s time to see what the politicians are saying.

If you haven’t seen them yet, make sure to check out projected loser Trump in the first photos that were taken of him following news that he will not be re-elected.

Congratulations to my friends, @JoeBiden and @KamalaHarris — our next President and Vice President of the United States. pic.twitter.com/febgqxUi1y

America has spoken and democracy has won. Now we have a President-Elect and Vice President-Elect who will serve all of us and bring us all together. Congratulations to Joe Biden and Kamala Harris on your momentous victory!

The voters have spoken, and they have chosen @JoeBiden and @KamalaHarris to be our next president and vice president.

It's a history-making ticket, a repudiation of Trump, and a new page for America.

Thank you to everyone who helped make this happen. Onward, together. pic.twitter.com/YlDY9TJONs

Thank you to all of you who poured every ounce of your hope and determination into this democracy over these past four years, registering voters, getting them to the polls, keeping folks informed. More votes were cast in this election than ever before. It’s because of you.

Let’s remember that tens of millions of people voted for the status quo, even when it meant supporting lies, hate, chaos, and division. We’ve got a lot of work to do to reach out to these folks in the years ahead and connect with them on what unites us.

We see now the reality that we can’t take even the tiniest part of our democracy for granted. Every single vote must count — and every single one of us must vote. And as a country, we should be making it easier, not harder to cast a ballot.

We’ve got to promise each other that our focus in this election won’t be an anomaly, but the rule. That’s how we can not only feel this way right now, but in the months and years ahead. It’s the only way we’ll build a nation worthy of our children.

Congratulations to President-elect Biden. I have prayed for our President most of my adult life. I will be praying for you and your success. Now is the time to heal deep wounds. Many are counting on you to lead the way.

The American people made it clear this week: they don’t want a government controlled by billionaires, giant corporations and their armies of lobbyists to favor the rich and powerful and corrupt our government. It’s time to take back our government and make it work for the people.

How refreshing that our president-elect is already at work to unite and heal – ready to serve everyone who voted for this ticket, and everyone who didn’t.

She is making history already, and she will serve our nation well.

Congratulations to Joe Biden and Kamala Harris for their historic win. In this incredibly difficult moment in American history, I wish them the best as they attempt to bring our nation together around an agenda of economic, social, racial and environmental justice.

It is time to unite this country and get to work!

Congratulations President-elect Joe Biden and Vice President-elect Kamala Harris and the team that led their campaign, the volunteers that powered their effort and the voters who have ended our national nightmare!