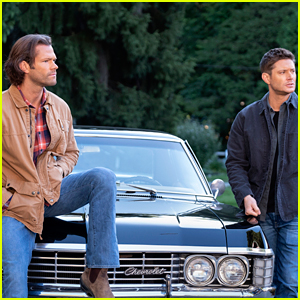 SPOILER ALERT – The series finale of Supernatural just aired and this post contains spoilers from the episode!

It’s the end of an era because The CW’s series Supernatural is officially over following the emotional series finale that just aired.

There’s so much to break down from the episode, but we’ll just focus on the major death that happened.

We don’t want to spoil anything for anyone scrolling by this post on the main page, so this is your final warning to stop reading before we start talking about THAT moment.

They always knew this time would come. #Supernatural #SPNFamilyForever pic.twitter.com/ISMg20y1KC

During Sam and Dean’s final hunt, Dean was pierced in the back and unable to move from a post.

Dean (Jensen Ackles) said to his brother Sam (Jared Padalecki), “Stay with me, please. You knew it was always going to end like this for me… It’s ok. It’s good. We had one helluva ride, man.”

Sam wanted to find a way to keep Dean alive, but Dean made Sam vow to not bring him back.

In an emotional moment, Dean told Sam, “I’m so proud of you, Sam. You know that? I’ve always looked up to you… You’re stronger than me. You always have been… It was always you and me. It’s always been you and me.”

Before he died, Dean put his hand on Sam’s chest and said, “I’m not leaving you. I’m going to be with you right here, every day, every day you’re living and you’re fighting, because you always keep fighting… I love you so much. My baby brother.”

We then see that Sam lived a long life and had a son that he named Dean. Many, many years later, Sam dies and goes to heaven and meets up with his brother Dean. The series ended with them hugging in heaven.