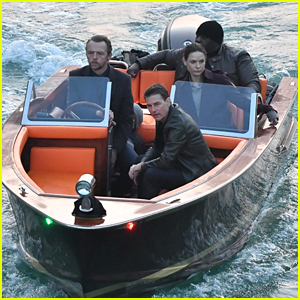 Tom Cruise rides a boat with his Mission: Impossible 7 co-stars while filming a scene on Thursday (November 12) in Venice, Italy.

The 58-year-old actor was reportedly filming one of the movie’s final scenes alongside co-stars Rebecca Ferguson, Simon Pegg, and Ving Rhames.

On Wednesday, the four actors were seen walking around Piazza San Marco for segment in the scene.

We have some photos of the movie’s villain shooting a fight scene with another star of the film earlier this week.

The seventh Mission: Impossible movie is currently scheduled to be released on November 19, 2021 and an eighth movie is going to be released one year later. Both of the movies will be directed by Christopher McQuarrie, who previously did Rogue Nation and Fallout.

100+ pictures inside of Tom Cruise and his co-stars filming for Mission: Impossible…