Lily James and The Affair actor Dominic West were seen getting very cozy in some new photos taken on Sunday (October 11) in Rome, Italy.

The 31-year-old actress and 50-year-old actor are set to co-star in the BBC’s upcoming The Pursuit Of Love together, and have been filming since the summer.

Now, they were seen together on a scooter ride and having lunch together. During the lunch, it appears as if Dominic kisses Lily on the neck and strokes her hair. You can see the photos at the DailyMail.

Dominic is currently married to Catherine FitzGerald since 2010 and they have four children together. No split has been announced at this time.

Most recently, Lily was linked to one of Hollywood’s hottest stars (and she refused to answer any interview questions about him, too.)

The Wanted boy band member Tom Parker has revealed he has been diagnosed with a brain tumor, and it is inoperable.

The 32-year-old singer and his wife Kelsey Hardwick sat down for an interview where they discussed that he was diagnosed after suffering two seizures this summer.

“They pulled the curtain around my bed and said, ‘It’s a brain tumour.’ All I could think was, ‘F*****g hell!’ I was in shock. It’s stage four glioblastoma and they’ve said it’s terminal. It was a lot to deal with by myself. I still haven’t processed it,” Tom told OK. The type of tumor he has is called a glioblastoma.

He also posted a message on his Instagram, writing, “Hey guys, you know that we’ve both been quiet on social media for a few weeks and it’s time to tell you why. There’s no easy way to say this but I’ve sadly been diagnosed with a Brain Tumour and I’m already undergoing treatment. We decided, after a lot of thought, that rather than hiding away and trying to keep it a secret, we would do one interview where we could lay out all the details and let everyone know the facts in our own way. We are all absolutely devastated but we are gonna fight this all the way. We don’t want your sadness, we just want love and positivity and together we will raise awareness of this terrible disease and look for all available treatment options. It’s gonna be a tough battle but with everyone’s love and support we are going to beat this.”

Doctors told Tom this is a “worst-case scenario” situation.

Tom and Kelsey have a 15-month-old daughter and a son on the way.

Tom was part of the band The Wanted, which broke up back in 2014. Our thoughts are with Tom, his family, and loved ones during this time.

Sandra Bullock stops by the hair and makeup trailer while arriving on set of her new movie on Thursday morning (October 8) in Vancouver, Canada.

The 56-year-old actress stayed safe in a face mask and shield as she returned to work on her new Netflix movie.

PHOTOS: Check out the latest pics of Sandra Bullock

The new project is adapted from the British mini-series Unforgiven, created by Sally Wainwright, and tells the story of a woman who tries to re-enter society after committing a violent crime. The project is being directed by Nora Fingscheidt.

Here’s a plot summary: “A woman released from prison after serving a sentence for a violent crime re-enters a society that refuses to forgive her past. Facing severe judgment from the place she once called home, her only hope for redemption is finding the estranged younger sister she was forced to leave behind.”

Filming for the project began before the pandemic. 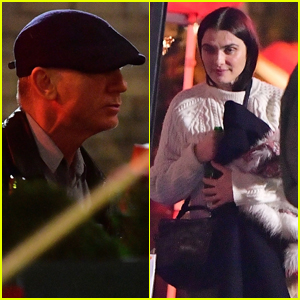 The 52-year-old No Time to Die actor and the 50-year-old Oscar-winning actress stepped out for dinner on Sunday evening (October 11) in New York City.

PHOTOS: Check out the latest pics of Daniel Craig

Rachel stayed comfy in a cream-colored, knit sweater while Daniel kept a low profile in paperboy cap as they grabbed a bite to eat together.

The couple – who married in 2011 – are very rarely seen out in public together. The last time they were spotted out together was in May of 2018!

If you missed it, Rachel and Daniel welcomed a daughter in September 2018.

Back in April, Daniel and Rachel appeared in a video together honoring NHS workers who are working hard during the pandemic.

It was recently announced that the release of Daniel‘s final James Bond movie No Time to Die has been pushed back yet again. Find out the movie’s new release date here. 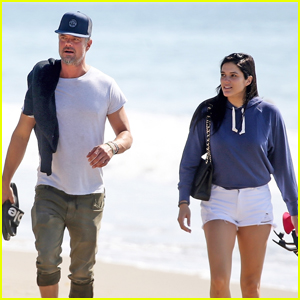 Josh Duhamel is enjoying a day at the beach with his girlfriend Audra Mari!

The 47-year-old actor went for a stroll along the ocean with the 26-year-old Miss World America winner on Sunday afternoon (October 11) in Malibu, Calif.

PHOTOS: Check out the latest pics of Josh Duhamel

A few days before, Josh released the trailer for his new movie Buddy Games, which will be released on November 24.

The last time we saw the couple together was back in July during a low-key dinner date at Nobu restaurant.

If you don’t know, Josh and Audra have been linked for several months now. Find out exactly when they began dating!

Bobby Bones is getting married!

The 40-year-old Bobby Bones Show host and American Idol mentor took to his Instagram on Sunday (October 11) to announce that he and girlfriend Caitlin Parker are engaged.

“I am the luckiest. I waited so long for the right one. And it payed off. Surprised her with a secret proposal in the barn in the backyard,” Bobby wrote along with several photos from his proposal. “After she said yes, our song ‘nothing left to lose’ by Mat Kearney was playing outside.”

“And it was @matkearney playing it,” Bobby continued. “She said it was at Mat’s concert during this song that she knew I was the one for her. So lucky he played it again for only us tonight. I’m so happy I get marry to love of my life.”

Vanessa Bryant is celebrating the Los Angeles Lakers on their big win!

The 38-year-old widow of Kobe Bryant took to her Instagram Story on Sunday evening (October 11) to congratulate the Lakers after defeating the Miami Heat to win the 2020 NBA Finals.

She also added, “Wish Kobe and Gianna were here to see this.”

The win marks the Lakers’ 17th championship, and first since Kobe led the team to victory back in 2010.

The Lakers dedicated their season to Kobe after he died in a helicopter crash in January alongside his daughter GiGi and seven others.

The 41-year-old reality star and the 20-year-old TikTok star posed for photographers while stepping out for dinner on Sunday night (October 11) in NYC.

Kourtney rocked a silk, silver dress while Addison donned a black dress for their night out on the town.

Earlier that day Kourtney wrapped up in a black trench coat as Addison wore a cream and orange-colored dress as they met up with a few friends for lunch. Before that, the BFFs went sporty as they started off their morning on a coffee run.

The night before, Kourtney and Addison coordinated in brown, leather looks as they headed out for the evening.

The ladies recently jetted off to NYC to celebrate Addison‘s 20th birthday, which was on Tuesday, October 6th.

If you missed it, Kourtney recently clapped back at criticism of their friendship.

10+ pictures inside of Kourtney Kardashian and Addison Rae out and about in NYC..

The new NBA champs have been revealed!

After six games, the Los Angeles Lakers defeated the Miami Heat to win the 2020 NBA Finals on Sunday night (October 11) in Orlando, Florida.

This marks the Lakers’ first championship win since 2010. They have now won 17 championship titles, tying them with the Boston Celtics for the most NBA title wins.

The win also marks LeBron‘s first win with the Lakers – since joining the team in 2018 – and his fourth overall championship win. He was also named the NBA Finals MVP this year.

“We just want our respect,” LeBron continued while getting emotional, singling out his team, his coach and his teammates. “And I want my damn respect.”

The Lakers’ win comes after a rough season for the NBA, following the tragic death of Kobe Bryant and a four-month hiatus because of the pandemic.

Congrats to the Lakers!

The 33-year-old entertainer took to his Instagram on Sunday (October 11) to share a couple of pics while celebrating his son’s third birthday.

“Young Stunna,” Drake wrote along with a pic of he and Adonis smiling.

Adonis‘ mom Sophie Brussaux took to her Instagram right at midnight to celebrate her son’s birthday.

“Joyeux anniversaire mon amoureux! 3 years ago, I was finally meeting you for the first time, after a long 24-hr labour. I’m so proud of the little man you’re becoming, I love you more than life. The world is YOURS! We did that @champagnepapi 💝” Sophie, 31, wrote.

If you missed it, Drake recently revealed that he dated this famous singer over a decade ago!