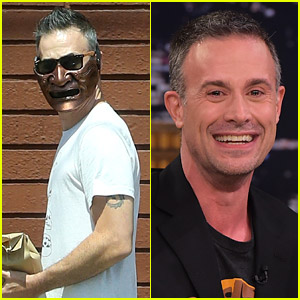 Freddie Prinze Jr. is nearly unrecognizable while stepping out to run errands on Thursday (August 6) in Los Angeles.

The 44-year-old actor wore a face mask that appeared to be part of a costume! He was also seen in the same mask on a grocery run the other day.

PHOTOS: Check out the latest pics of Freddie Prinze Jr.

A few months ago, Freddie gave an interview in which he opened up about how his and wife Sarah Michelle Gellar‘s friendship began. It all started while they were on the set of a movie two decades ago!

If you love FPJ and SMG as a couple then you’ve gotta see the pajamas that she has been wearing during quarantine. They’re so cute and fans are gonna love them.