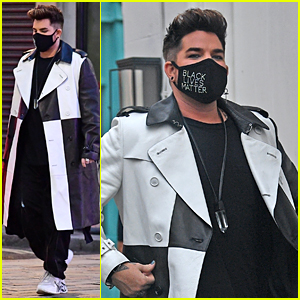 Adam Lambert supports the Black Lives Matter movement via his face mask while stepping out on Friday (October 9) in the Soho neighborhood of London, England.

The 38-year-old singer was joined by a friend while stopping by the Apollo Theatre, where the musical Everybody’s Talking About Jamie is performed. The show has been on hiatus during the pandemic though, so it’s not clear what Adam was doing at the theater.

That same day, Adam took to Twitter to encourage fans to vote out Trump. He tweeted, “Trump sows so much chaos, and he wants you to feel overwhelmed by the simple act of voting. Prove him wrong by using this awesome tool to help you #MakeAPlan to vote early in your state.”

Adam and Queen just released their first-ever live album and it’s streaming wherever you listen to your music!