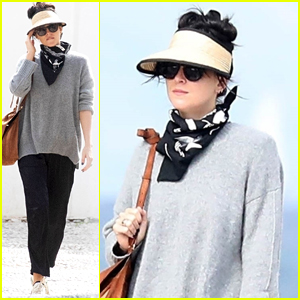 Dakota Johnson checks out the local stores on the island of Spetses in Greece while taking a break from filming on Friday (October 30).

If you don’t know, Dakota has been busy filming Maggie Gyllenhaal‘s new movie The Lost Daughter on the island for a few weeks now.

The movie has a great cast including Olivia Colman, Paul Mescal, Oliver Jackson-Cohen and more. Currently, the film does not have a release date but it is expected sometime next year.

We’re glad to be seeing more and more photos of Dakota lately! We hadn’t gotten many photos in early October and the last we saw of her, she was on vacation with her boyfriend Chris Martin. See all the photos of the pair from early September.