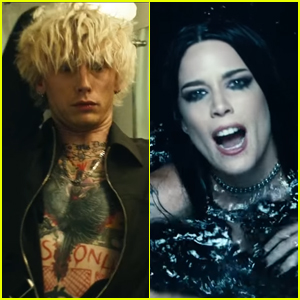 Machine Gun Kelly has a new music video out!

The 30-year-old rapper just dropped the music video for “forget me too” featuring Halsey.

Directed by Philip Andelman, the video features a Magic 8-Ball torturing the two singers with their ex’s memory. Despite trying to destroy their memories, MGK and Halsey are still drawn to each other.

“forget me too” is the latest video off of MGK‘s latest album Tickets for My Downfall, which he released last month. The album also earned MGK his first No. 1 on the Billboard 200 chart!

It was reported that MGK and his new girlfriend Megan Fox recently took a major step in their relationship.

Earlier this week, it was revealed that Machine Gun Kelly is being replaced by this Friday Night Lights actor in a new movie.