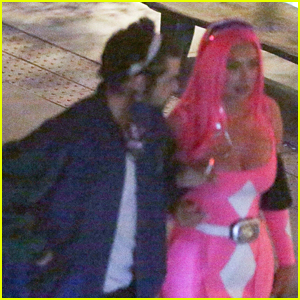 Noah Centineo‘s relationship with Stassie Karanikolaou seems to be heating up!

The 24-year-old To All the Boys actor and the 22-year-old social media star were spotted packing on the PDA while attending a Halloween party on Thursday night (October 29) in West Hollywood, Calif.

Stassie and her BFF Kylie Jenner dressed up as the Power Rangers alongside some of their other friends.

Earlier this month, it was rumored that Noah and Stassie had eloped in Las Vegas, thanks to multiple people sending in the report to a gossip Instagram account. However, sources have confirmed to Cosmopolitan that they are simply just rumors and there is no truth to them.

We also have some photos of Noah and Stassie out for dinner with their friends last week.