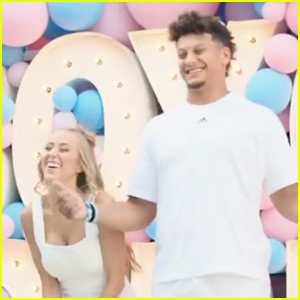 Patrick Mahomes and Brittany Matthews just found out if they’re having a boy or a girl!

The 25-year-old Kansas City Chiefs quarterback and his pregnant fiancee, also 25, both took to their Instagrams to share a video from their gender reveal party.

In the video, Patrick and Brittany are both standing with their backs turned away from their backyard. Then their two super cute dogs started walking on a white carpet to reveal that they had pink paint on their paws – meaning the couple is expecting a baby girl!

Patrick and Brittany announced that they expecting their first child together late last month. The pregnancy news came just a few short weeks after Patrick asked Brittany to marry him.

Congrats to the parents-to-be!