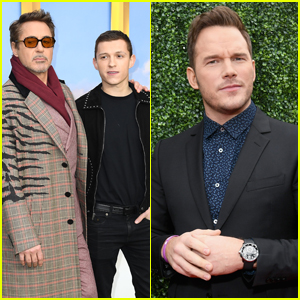 Robert Downey Jr. came to the defense of Chris Pratt, but it’s the photo he used that is now getting some attention and mockery from people online.

The 55-year-old actor posted a photo with his Marvel co-star on Instagram to provide words of encouragement after Chris was “cancelled” in a poll about everyone’s least favorite Chris in Hollywood – and fans are noticing that he seemingly Photoshopped Tom Holland out of it to make his point!

PHOTOS: Check out the latest pics of Robert Downey Jr.

“RDJ’s team photoshopping Tom Holland out of this photo to do damage control for Chris Pratt bc they had no other photos of the two of them together is so…..funny,” one popular tweet reads on Twitter.

An alternate angle from the photo of the trio on set is on Tom Holland‘s Instagram.

Find out what he said in Chris Pratt‘s defense.

Another celebrity just explained why she Photoshopped shoes on her feet in another viral social media find.