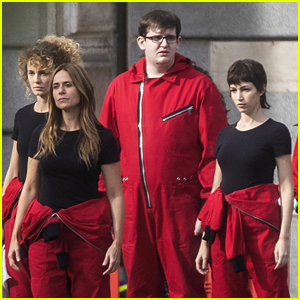 Money Heist is returning to Netflix for one more season and the cast is currently filming the final episodes of the smash-hit series!

Esther Acebo (Stockholm), Itziar Ituno (Lisbon), and Ursula Corbero (Tokyo) were spotted filming a scene outside of the Bank of Spain on Wednesday (October 21) in Madrid, Spain.

SPOILER ALERT – The third and fourth seasons have followed the heist of the Bank of Spain, which takes place three years after the heist of the Royal Mint of Spain. At the end of the season, Lisbon has successfully joined the gang within the bank while the Professor is discovered in his hideout by Inspector Sierra.

In the photos, we can see Stockholm waving a white flag while she stands with Lisbon and Tokyo in front of the hostages, including Miguel Fernández, played by Carlos Suarez. A white flag usually symbolizes a truce.

This past summer, it was announced that the fifth season of the series will be the last one. We’ll be sad to say goodbye!

One of the stars of Money Heist showed off a LOT of skin this summer in a sexy Instagram pic.

45+ pictures inside from the set of Money Heist…