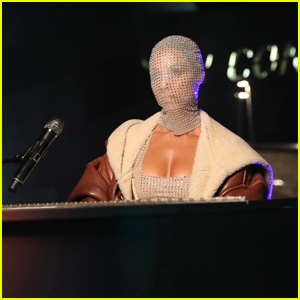 Alicia Keys is taking over the stage at the 2020 MTV Europe Music Awards!

The 39-year-old entertainer performed her new song “Love Looks Better” during the awards show which aired on Sunday (November 8).

PHOTOS: Check out the latest pics of Alicia Keys

For her performance, Alicia donned a bedazzled face covering and with a matching crop top that showed off her toned midriff.

Alicia was seen filming the performance earlier this week at an outdoor location in Los Angeles.

“Love Looks Better” is the latest single off of Alicia‘s new self-titled album, which she released in early September. You can stream the new album here.

In a recent interview, Alicia Keys revealed that one of her biggest hits almost went to another superstar. Find out what happened!