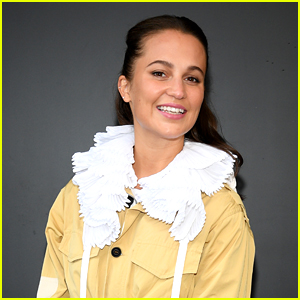 Alicia Vikander has signed on to star in a new version of Dial M For Murder.

According to The Hollywood Reporter, the 32-year-old Oscar winner is expected to star in the television anthology drama and also executive produce.

This version of Dial M for Murder would be an anthology series that will reset each season, and it is a new take on the 1952 play and 1954 film which will be told from the female perspective.

In the 1954 movie, ex-tennis pro Tony Wendice wants to have his wealthy wife, Margot, murdered so he can get his hands on her inheritance. When he discovers her affair with Mark Halliday, he comes up with the perfect plan to kill her.

Alicia has been attached to a ton of new projects this year, despite the pandemic looming over the world.

She has a movie with John David Washington that will debut on Netflix, and her flick with Justin Chon just got a release date too!

Just recently, Alicia and her husband, Michael Fassbender, were spotted out in a rare sighting in this international city!