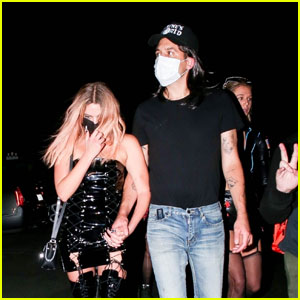 Ashley Benson and G-Eazy are enjoying a night out for Halloween.

The 30-year-old Pretty Little Liars actress and the 31-year-old “I Mean It” entertainer were spotted out together on Halloween (October 31) in costume in Los Angeles.

PHOTOS: Check out the latest pics of Ashley Benson

G-Eazy opted for a Wayne’s World homage, while Ashley kept it sexy in a leather dress and matching boots as they partied through the night.

The two got into the spirit at the Nights of the Jack Halloween experience earlier in the week.

Ashley and G-Eazy were spotted kissing as he shot a new music video in September in Malibu, Calif. See the set photos!

The couple sparked engagement rumors when Ashley was spotted wearing a diamond ring on her left ring finger.

Get the scoop on the Pretty Little Liars reboot!