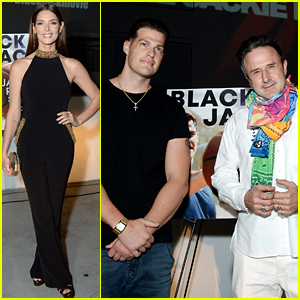 Ashley Greene looks glam in her black jumpsuit while attending the drive-in premiere of her new movie Blackjack: The Jackie Ryan Story on Sunday (November 1) at The Andaz Hotel in West Hollywood, Calif.

The actress was joined at the event by her co-stars Greg Finley, David Arquette, Brandon Thomas Lee, and Robert Davi, as well as director Danny A. Abeckaser and the real-life Jackie Ryan.

Blackjack: The Jackie Ryan Story is based on the inspiring true story of Jackie Ryan, an American basketball player from Brooklyn, New York. Jackie is a hot tempered, flamboyant, and self-centered streetball legend, whose dreams of playing professional basketball seem to have passed him by after years of hard partying and neglect.

Brandon was joined at the event by his girlfriend, Daniella Beckerman. Guests at the event enjoyed M&M Candy Pop popcorn provided by Snack Pop.

The movie is streaming right now wherever you watch your movies on demand, including iTunes and Amazon.