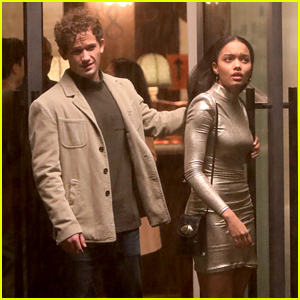 A reboot of the beloved The CW series Gossip Girl is in the works for HBO Max and we have some brand new photos from set!

The show just began filming in New York City this week and two of the series’ young stars were seen shooting a scene on Thursday night (November 5).

Eli Brown and Whitney Peak were seen exiting a building in the Big Apple and it looks like they possibly were on a dinner date in the scene.

Eli is known for his role on the Freeform series Pretty Little Liars: The Perfectionists and the movie The F–k-It List, which is streaming on Netflix. Whitney was previously seen in the Netflix series Chilling Adventures of Sabrina and the movie Molly’s Game.

Not much is known about the characters on the Gossip Girl reboot, but Eli and Whitney are said to be part of the show’s “main trio,” according to Deadline.