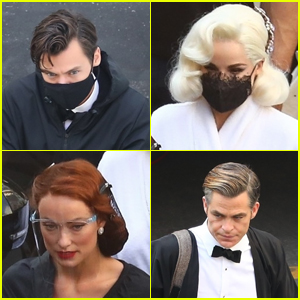 Harry Styles, Dita Von Teese and Chris Pine are getting back to work.

The stars were all seen arriving back on set to work on their highly anticipated Olivia Wilde-directed and co-starring film, Don’t Worry Darling, on Tuesday (November 3).

PHOTOS: Check out the latest pics of Harry Styles

KiKi Layne and Sydney Chandler were also spotted on set.

The stars were also seen filming for the production earlier in the week.

Not pictured in the photos if the film’s lead actress Florence Pugh, who was seen hanging out with Harry at a restaurant in Los Angeles a couple of weeks ago.

Not much is known about the plot of the film, though THR reports that “the setting is an isolated, utopian community in the 1950s California desert and centers on a housewife who uncovers a disturbing truth about her seemingly perfect life.”

30+ pictures inside of Harry Styles, Olivia Wilde and more on set…