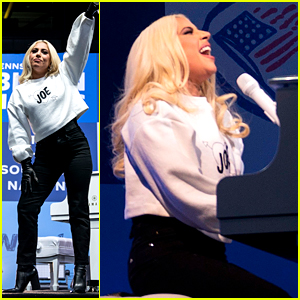 Lady Gaga sings her heart out while on stage for Joe Biden‘s final campaign event before election day on Monday night (November 2) in Pittsburgh, Penn.

The 34-year-old Oscar-winning entertainer performed her songs “Shallow” and “You and I” at the drive-in event, where she also gave a speech in which she slammed President Trump.

While introducing her performance of “You and I,” Gaga opened up about her ex-fiance Taylor Kinney, who is from Pennsylvania, and then later stopped the song to apologize to her current boyfriend, who was in the audience.

Before hitting the campaign trail withe Joe, she went on Instagram and said, “Good morning PENNSYLVANIA! I’m so excited to see you today and SING for you!!!!!!! I believe in 🎶 YOU & I!!!! Let’s talk about what America looks like with a KINDER President. WE NEED EVERY VOTE❤️ I’m with @JoeBiden —Lets go 24 hrs!!!!! PUSH!!!!!”