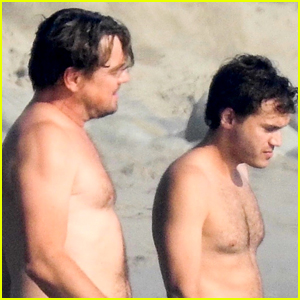 Leonardo DiCaprio and Emile Hirsch show off their beach bodies while going shirtless for a fun day in the sun on Friday (November 6) in Malibu, Calif.

The longtime BFFs were joined by a group of family and friends, including Leo‘s dad George DiCaprio, while enjoying the warm Los Angeles weather. It got much chillier in the city just two days later!

PHOTOS: Check out the latest pics of Leonardo DiCaprio

Leo hasn’t been spotted that often lately, but we do have some photos of him on a dinner date with his girlfriend last month.

It was recently announced that Leo has joined the cast of an upcoming Netflix movie that has so many A-List stars included.