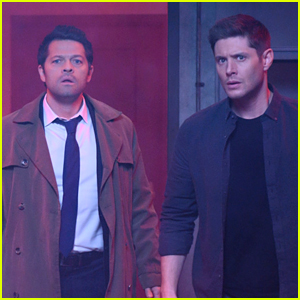 Misha Collins is opening up about his final scene on Supernatural, in which his character Castiel confessed his love for Jensen Ackles‘ character Dean and then died moments later.

Fans have been debating if the “Destiel” moment is considered canon, which means that it actually happened in the fictional universe of the story, unlike fan fiction.

Well, now Misha is confirming that that moment was indeed canon!

During a Zoom call this weekend, Misha talked about the scene. He said, “Castiel tells Dean he loves him and like basically makes Destiel canon. Fans are kind of freaking out over that. And then to complicate matters, he dies right after that. So Castiel makes this homosexual declaration of love, which is amazing that that happens, and then he dies right after, which plays into a timeless Hollywood trope of kill the gays. We give and then we take away.”

To learn about why Castiel had to die after confessing his love, check out our spoilers post for the episode.

Misha previously reacted to his character’s heartbreaking ending in a post-episode interview.