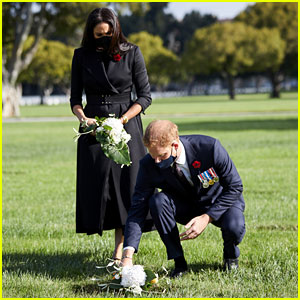 Meghan Markle and Prince Harry might not have been in London to join their family for Remembrance Day services, but they did honor the event in Los Angeles.

The Duke and Duchess of Sussex were pictured arriving at the Los Angeles National Cemetery on Sunday afternoon (November 8), wearing red poppies and laying a few wreathes in tribute to those who have served and to those who gave their lives.

The couple laid flowers that Meghan picked from their garden at the gravesites of two commonwealth soldiers, one who had served in the Royal Australian Air Force and one from the Royal Canadian Artillery.

Harry and Meghan also placed a wreath at an obelisk in the cemetery that features a plaque that’s inscribed “In Memory of the Men Who Offered Their Lives in Defence of Their Country.”

He also signed a message with the wreath saying: “To all of those who have served, and are serving. Thank you.”

Harry and Meghan also wore their face masks while arriving at the cemetery, and removed them when they were a distance away from others.

If you didn’t see, the palace reportedly denied Harry‘s request to have a wreath laid during the services in London. Here’s what happened…