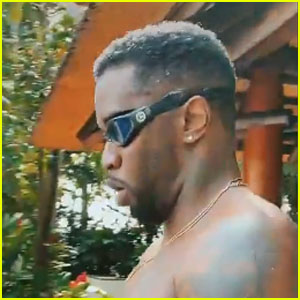 The 51-year-old entrepreneur got social media buzzing after uploading a video of himself diving into a pool over the weekend on TikTok.

PHOTOS: Check out the latest pics of Diddy

“Working on my dive,” he captioned the hilarious post, which featured the superstar in a bathing suit standing at the end of a pool and putting on goggles before preparing himself with a deep breath and clumsily diving into the water.

The video has over 850,000 views, going viral with users commenting and laughing at the silly scene. The video then got shared on Twitter, with many people reacting by making memes of the clip, putting their own spin on it by inserting Diddy into different hilarious scenes.

He was recently seen kissing someone, sparking romance rumors!

Been practicing my dive