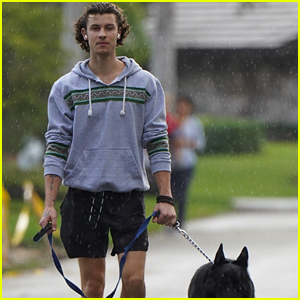 Shawn Mendes braves the rainy weather without an umbrella while going for a walk with Camila Cabello‘s dog Thunder on Thursday (November 5) in Miami, Fla.

The 22-year-old “Wonder” singer wore his AirPods during his walk around the neighborhood.

On Wednesday, Shawn and Camila were spotted on a bike ride while Tarzan walked alongside them.

Earlier this week, the couple took to Instagram to introduce the new puppy that they just welcomed into their family… a Golden Retriever named Tarzan!

In just one month, Shawn will be releasing his fourth studio album, Wonder. He has already dropped the first single, which is also called “Wonder.” We can’t wait to hear more songs from the album!

Shawn recently opened up about quarantining with Camila and what life has been like for them.