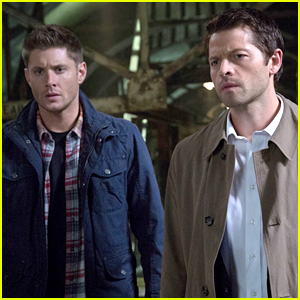 Fans are not happy by something that was left out of the series finale of The CW’s Supernatural, which just aired.

Two weeks ago, Misha Collins‘ character Castiel was killed off, but first he confessed his love for Jensen Ackles‘ Dean.

This relationship is one that fans have been writing into fan fiction for years and since it actually came true on the series, it officially became “canon.” But, since Castiel was killed off right after the moment happened, fans felt cheated of a relationship they hoped to see explored in the series.

Many fans were hoping to see Castiel make a return in the series finale so they could receive closure to the “Destiel” storyline, but they didn’t get their wish.

Read below to see what fans are saying about the show’s ending.

And our clown asses actually thought the CW would have the balls to give Destiel a happy ending. Sam got the wife, the kid and the dog and our baby boy got a rusty nail in the back and a barbecue funeral. I’m SICK. #SupernaturalFinale #supernatural

SPN SPOILERS KINDA the writers are homophobic and used destiel for views, only to finish it in a way that makes it impossible for it to be confirmed in a romantic way, thus allowing ppl who dislike destiel to deny that it was a romantic confession ! I will not take criticism!

#SPNSpoiler we’ve know for weeks that 15×18 was cas’ last appearance. that was his storyline finished. and as much as i want destiel to be together and happy too, i just think we need to try not let that cloud the fact 15×20 was about the brothers and wrapping up *their* story

All I wanted since S4 was Cas but especially Dean to acknowledge the “more profound bond” they shared and ACTED UPON IT. You really mean to tell me destiel became canon but also ended in the span of 1 minute and 30secs?!?!?! What the actual fuck?!?! #Supernatural #destiel

As someone who stopped liking Destiel years ago I'm not surprised nothing happened and glad it didn't. But, once again, Cas/Misha got fucked over. The guy who saved the show isn't in the last episode other than a gag. Mentioned in a sentence. I'm disappointed for him.

i’m so sorry misha they did you and cas so dirty and that wasn’t a fitting ending for sam or dean at all. do i still love the show? not really. do i still enjoy it and appreciate it immensely? yes. was that ending very queerbaited, homophobic, and overall bad? yeah, kinda was.

I can see now why Jensen had issues with that ending when he first got the script. awful in every way. Just bury your gays & Bi’s, make cas sacrifice pointless, have Legendary Dean Winchester killed by a nail from vamps, only the Hets get to be happy #destiel #Supernatural

destiel has been keeping me alive for 5 years. they saved me. i am feeling so invalidated, so in pain. what the hell was that finale? how about castiel's confession? WHAT WAS THAT? I CAN'T BELIEVE IT#supernatural pic.twitter.com/Qd9vnV9fWo

No but seriously: it's also not "just" about Destiel. Like that's an undeniable part but it is… not the whole thing. They KILLEDDDD them. DEAN WENT TO BAT WITH EVERY MONSTER & BEING & GOD HIMSELF & HE DIED FROM A NAIL. THAT'S NOT QUEERBAITING SO MUCH AS IT IS DEEPLY STUPID

if you think the ending was shitty because of covid – think again. misha was supposed to be in the last scene – probably the montage! in no other scene was he meant to be included. reciprocated #destiel was never the endgame. don't try to blame the virus for shitty storytelling.