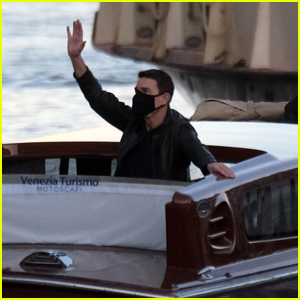 Tom Cruise is spending another long day on set of the new Mission Impossible!

The 58-year-old actor waved to fans while aboard a boat on Tuesday afternoon (November 17) in Venice, Italy.

PHOTOS: Check out the latest pics of Tom Cruise

Tom stayed safe in a black face mask while taking a break in between scenes while filming on the Grand Canal.

We have some photos of the movie’s villain shooting a fight scene with another star of the film earlier this week.

The seventh Mission: Impossible movie is currently scheduled to be released on November 19, 2021 and an eighth movie is going to be released one year later. Both of the movies will be directed by Christopher McQuarrie, who previously did Rogue Nation and Fallout.

If you missed it, Tom is heading out of this world – literally! – for a new movie.